Disability in Ghana
Skip to content
Obiri
July 18, 2019by ghanadisability 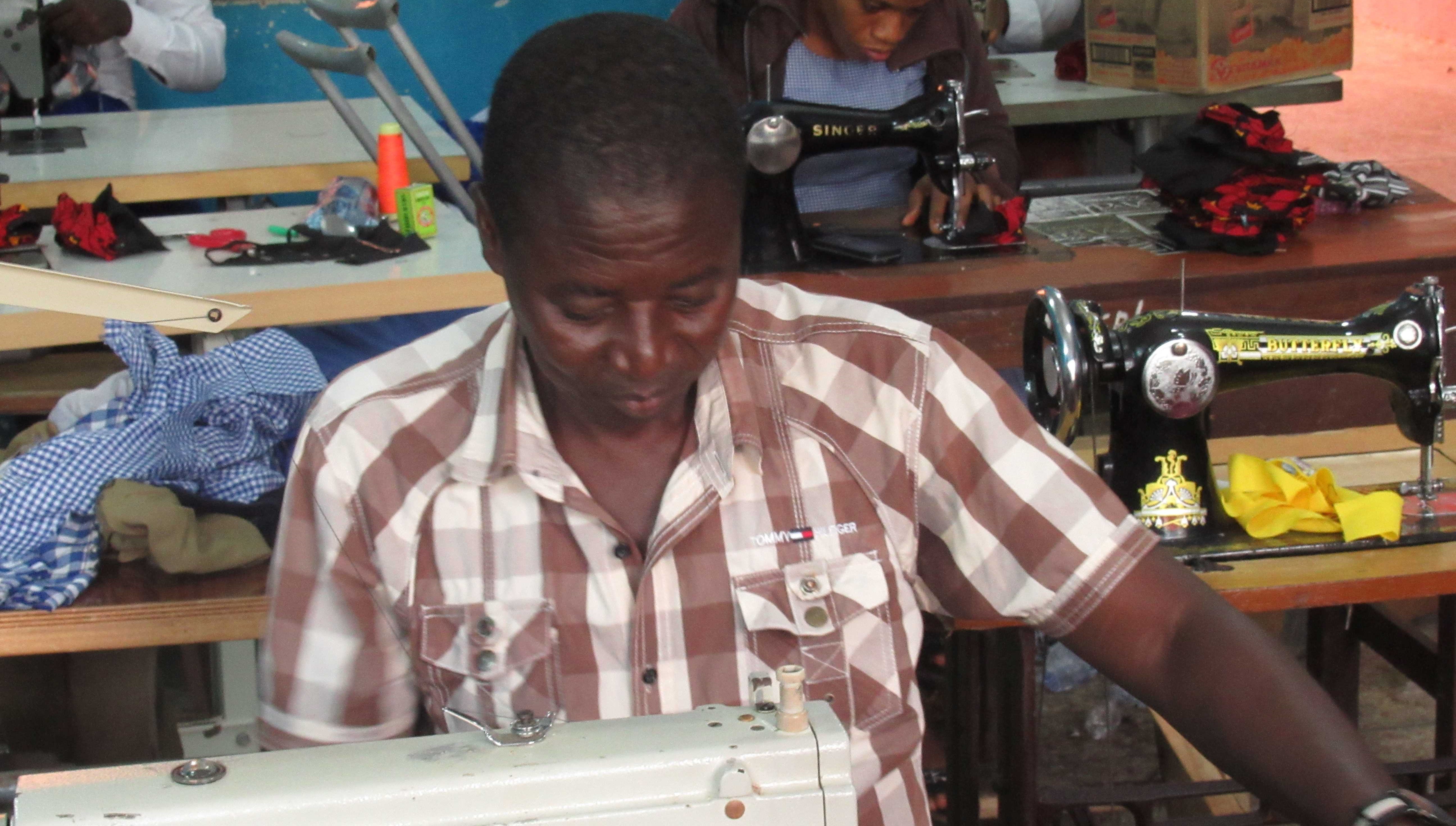 Obiri Yeboah was born at Bekawi Bogyawe. At the age of five Yeboah lost the ability to walk after receiving an injection for an illness. Both before and during his time with the GSPD Yeboah worked as a tailor. He joined the organization near the beginning of its formation. He helped to spread the GSPD into Bekawi by promoting the organization and gaining new members.

“At the time that the [GSPD] was being formed they came to the rehab center to alert us. Most of us the disable persons were already there. The first came there to meet me when I was there… Kwasi Offei and Mr. Hagan and the rest. Our former president Mr. Wereko and Atakorah. When they came, I was at the rehabilitation center and they informed us of a group they’re forming. So they will come and pick us up on Saturday to the ministries where the meeting will take place… [At that time] it was very unusual to see two disabled persons walking together because of the stare from the public. It is still the same today. We even feel shy of ourselves as disabled persons when we meet on the streets. Even today when we are seen walking together in pairs or three, it would somewhat be spectacle to the public. In every two weeks we met and when we saw each other, we on the streets we encouraged each other to join the group… We started spreading the news to others and we met every two weeks. Then, GNTC, Kingsway, Glamour and other government owned stores supplied us with victuals. This helped the group to grow since we shared with the newcomers. With this success, the leaders decided to extend this program to other regions. Branches were started at Koforidua and other places as regions. Kumasi remained the headquarters. Mr. Wereko was nominated as our head to oversee the running of the group. The president was to be elected at the national conference which was unanimously given to him again. Mr. Wereko was very instrumental to the development of the group. He served two terms as the president of the group without any competition

The first route march we organized to launch the group attracted a very large crowd… It was a gathering of persons with disability. It looked like a festival with a paramount chief in attendance. Everyone wanted to know who we were. Kwesi Ofei, a cripple, with his dancing skills pulled the crowd to witness what we can do as persons with disabilities. His carefree attitude attracted lots of disabled persons to join the group… We started from ministries but I can’t tell where we ended it.

We kept publicizing the group. Any time we met a disabled person we invited him/her to join the group. During periods of choosing chiefs, disabled persons are not allowed to go out; they are mostly kept indoors. The group created an awareness of how disabled persons can also be educated. Our leaders exemplified this by their fluency in the English language. This encouraged parents to bring their disabled children to join the group. They always advised that, disabled children can be educated and trained just as normal children are trained. If you keep them indoors and feed them, how can they face life in your absence? This really encouraged parents to bring out their children. As you can see the group has developed from so much that districts has been formed in the various regions

Initially, I came from Bekwai Bogyawe to meetings. From the beginning, the whole Asante Region meet at Kumasi. Transporting oneself to the meeting grounds was a challenge for most of us. The leaders realizing that Bekwai Bogyawe where I come from, had many surrounding villages so they established branches there. We were to meet on regular basis to discuss issues. Our major concerns were to be presented at the major meeting at Kumasi by our representative. This is where I served as one of the leaders. Bekwai’s branch was established quite early. The tailoring was not lucrative there so my uncle from Krofrom had a place there for me where I went to establish myself. When I left Bekwai, I went back to Kumasi. But when I was at the rehabilitation center, I was in Kumasi so my role in Bekwai was short-lived…Whiles there we moved around the villages and introduced the group to them. There were no assemblymen at that time. We met with the committee members of the village and parents of the disabled persons. We often told them about the group where we meet and how to help their disable children live just as any other person. We often told them of our meeting days and how the government could help them. We encouraged them to snap out or avoid feel sorrowful and therefore the parents were asked to support their wards.

[The way forward for the GSPD is] the government has to give full scholarship to able persons. When you come to Gyaakye here the children pay school fees and light bill. One may get 10% out of every 100 disabled persons coming from good homes. Gyaakye is the main training grounds for the persons with disability. Not all disabled persons can acquire a particular life skill but when you give a particular task they can perform it. We appeal to the government to include us in the one district one factory project… We are concerned about the younger generation. It is our wish that the group help provide formal education to the younger generation. It is my major prayer. This will help us attain our freedom. When my father died and I couldn’t renew my caliper it had effect on me leading to my irregularity at school. So if I had a higher formal education couple with my trade, it would have been of greater benefit. It is really my greatest prayer.”