Disability in Ghana
Skip to content
Vivian
June 19, 2019by ghanadisability 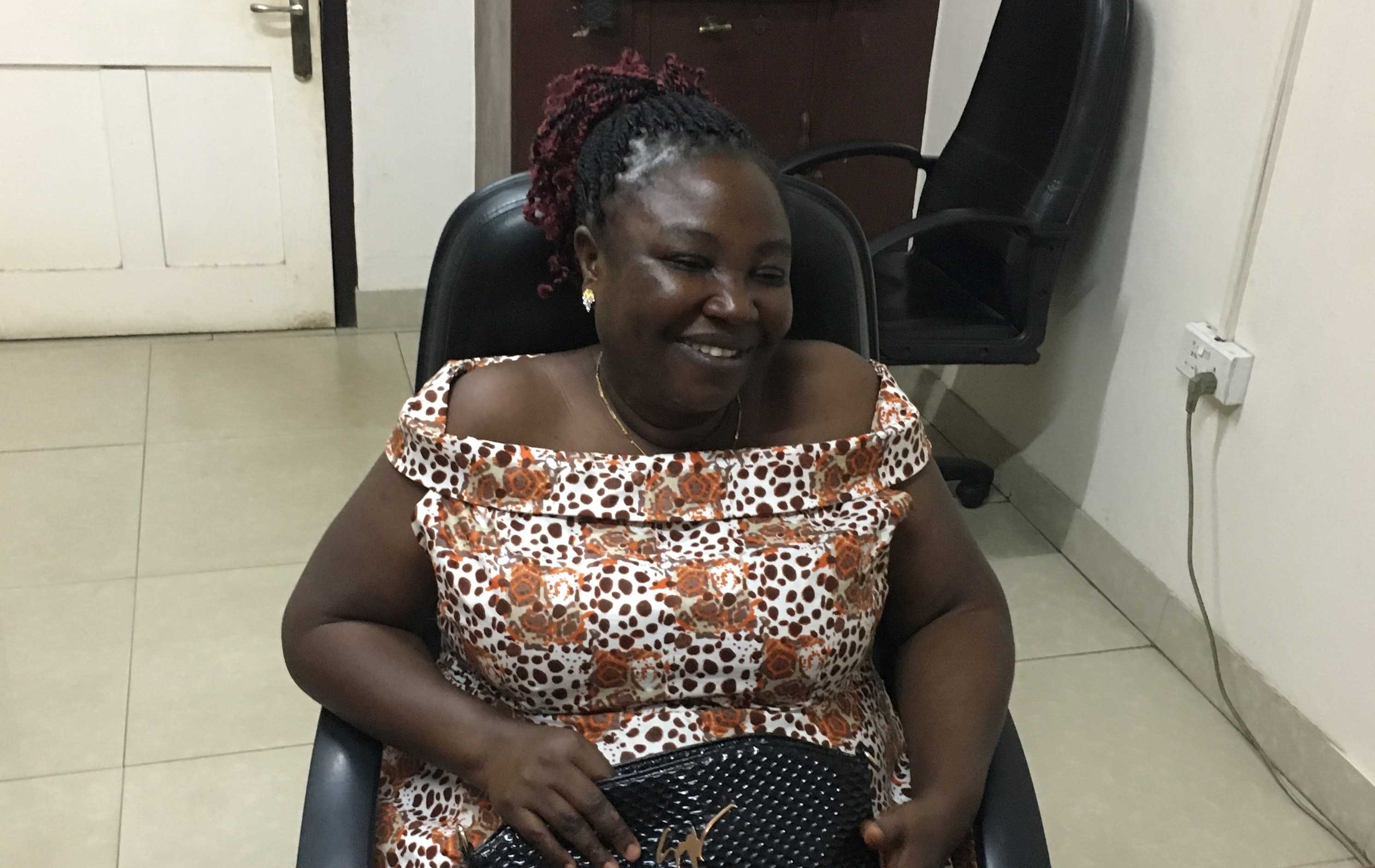 Vivian Dede Nartey was born on September 18, 1966 in Agoteme Opagame of the Volta region, hailing from the Ewe ethnic group. Her mother, Florence Adwoa Asare, and father, Vincent Nartey, come from Okagyakrom and Agoteme Opagame respectively in Ghana. Currently, Vivian lives at Kpando with her nine siblings where their father works as a fisher man. She went to Dodo Amanfro School in the Volta Region for her lower primary and from there continued her upper primary at Damanko in 1979. However, Vivian could not further her education due to financial problems and she stayed in the house for three years even though she had passed her common entrance exams.

Nartey was born sighted and completed her basic and her junior high education without experiencing any eye problems until she got to high school. In 1984, she began to lose her sight when she went to Kpando Technical Institute. In her first year, she started to notice some signs that something was wrong, such as her eyes beginning to itch and experiencing blurred sight. Her teachers noticed her struggles and tried to help the situation by ensuring that she sat at the front of the class where she would have unobstructed view of the board. Unfortunately, her situation did not improve and because of her diminishing sight, reading and writing became difficult for her and she started performing poorly academically. After several months she realized that she could not see from one eye, which eventually affected the other eye. In 1985 she began having severe migraine headaches, which continued for some time. However, she was able to cope with it and completed her secondary education. She completed school in 1985 and got married. Unfortunately, Vivian had a miscarriage with her first pregnancy, which doctors later connected to her severe migraine headaches. She was referred to Kolebu hospital where she was diagnosed with glaucoma. Vivian and her family were devastated by this news, knowing that the condition was not reversible. At this point she still had some sight in one eye, so she resolved to do everything in her power to save it. As a result, in 1996 she underwent two eye surgeries in an attempt to preserve the little sight she had left. Unfortunately, this was to no avail and Vivian lost her sight completely.

Nartey’s situation had many social ramifications. Her husband was not able to reconcile with the fact that he was married to a blind woman. He, like many people, viewed disability as very negative and began to maltreat her and cheat on her. Nartey, like many women of her time, tried to bear the mistreatment for a time. When her husband began to cheat on her, however, it was the straw that broke the camel’s back and she divorced him.

Taking charge of her life, Nartey moved with her two children to her family house to live with her parents. However, after a while she had to leave again because of the high level of stigmatization she experienced there. Life became so difficult that at a point Nartey felt like giving up and committing suicide. Fortunately, she met a good Samaritan who encouraged her. She managed to secure some capital from this person and began to bake and sell bread to earn her income so she could look after herself and her family. Her hardships, however, did not end here. Her trading job suffered a setback when robbers attacked her shop and stole virtually all her wares. Despite all this, Nartey refused to give up. She secured another loan and began trading again, this time in the area of kitchen utensils, determined to make it work. Nartey was more successful and found that she was able to enroll her children in school. Although Nartey lived what was a very independent life, she still did not have all the skills needed for effective independent living. In 2004 Nartey was introduced to the Ghana Association of the Blind by a blind teacher who she had met in church. She was immediately attracted to the kind of discussion and fellowship the members had with one another. Barely a month later she had joined the GAB and took part in a workshop which was organised to empower its members. She was very active at this workshop and served in part as an interpreter for those individuals who did not understand English. This program had a profound effect on Nartey, and she began to get more involved in the activities of the GAB. Her zeal and energy were noticed by some of the leaders of the GAB and they suggested Nartey stand for leadership positions. Greatly encouraged by this, on her return to her home district of Kpandu she devoted her energies to the mobilization of blind women to join the organisation. Later in 2007, she was able to organize a workshop geared at empowering blind people in the district. Not surprisingly Nartey became the women’s coordinator for the Volta region in 2007. She used her newly acquired lobbying skills to secure support from the district assembly for the efforts of the GAB to organize more programs in her districts. Nartey also targeted blind children who were not in school and advocated for support from the local authorities to put these children in school. These activities took her through the length and breadth of the region, including to the very little villages whenever she learned of the presence of blind children not in school. Wherever it was established that the parents could not afford to put the children in school or did not see the need to, Nartey through her education campaign lobbied for admission for these children and money from churches and other institutions to pay for the fees of them.

As an executive member of the regional branch of the GAB Nartey did a lot of advocacy on the radio and in public meetings. In 2010 she was elected to the position of regional Public Relations Officer. Later in 2012 she became the regional President and held this position until 2018 when she was elected as the National Vice-President of the Ghana Blind Union. Nartey is a mentor to many young people in the Volta region. Apart from her involvement in the activities of GBU, she is also very active in community affairs. For instance, in 2015 she contested for the position of Assembly Woman for the Kpandu district. Although she lost this contest, it greatly boosted her confidence and inspired her to advocate more for the rights of blind people. Nartey was also instrumental in the establishing of many district branches for her organizations.