Disability in Ghana
Skip to content
Michael
June 19, 2019by ghanadisability 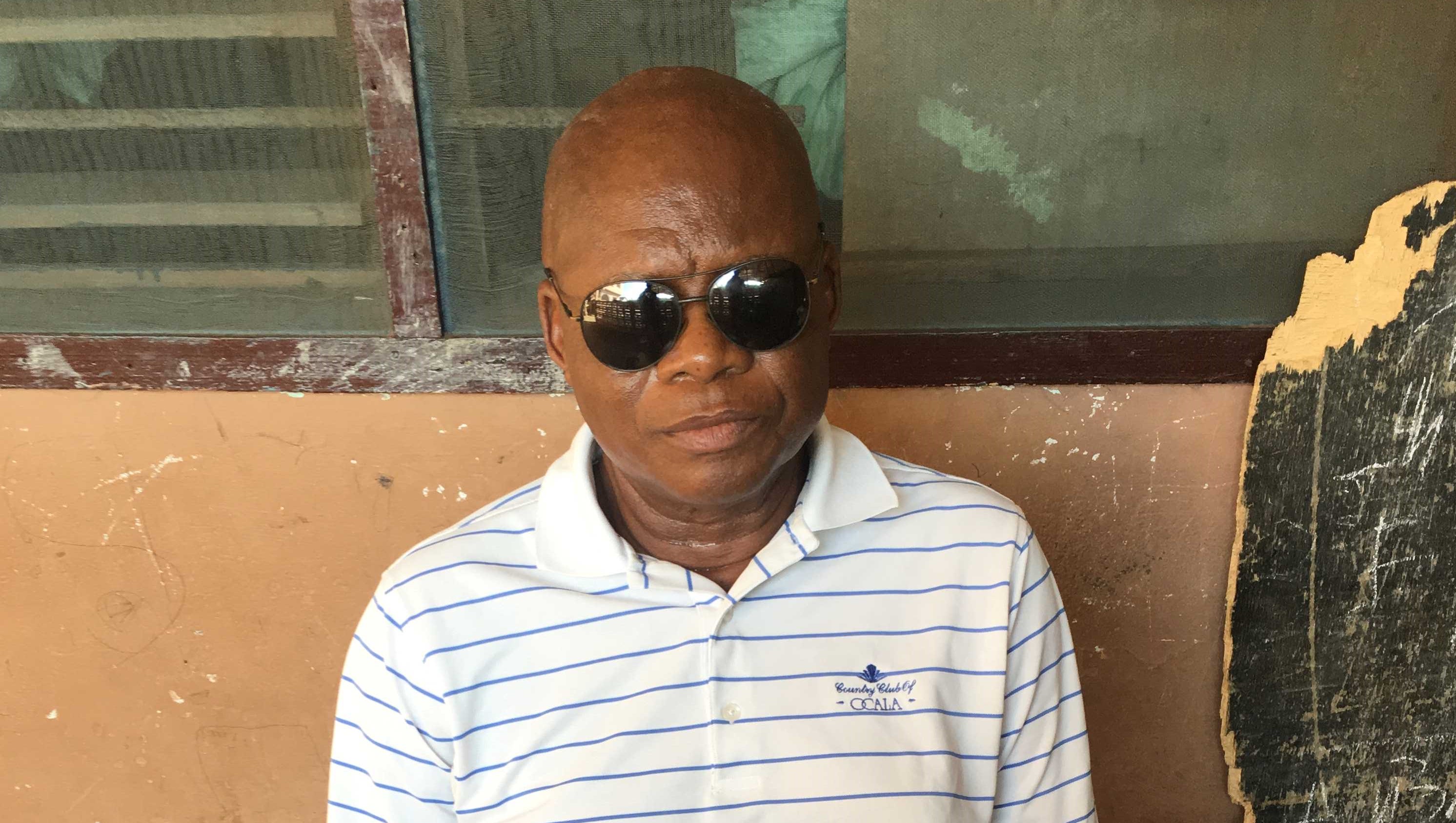 Michael Owusu Asante was born in Accra on August 6, 1954 and hails from Anum in the Eastern region. His family moved to Accra Newtown when he was two in 1956 and remained there to date. He has ten siblings; seven brothers and three sisters, though one has passed on.

In 1960 when Asante was six years old, he attended Garden Temple Preparatory School in Accra as a sighted child. Michael’s disability started when he was in Anum Boys Middle School in 1968. The blindness started in his left eye, though he was able to see partially until it eventually affected his other eye. He was in form one and became totally blind by 1971. He had no accident or pain that would have led to the disability, it simply occurred. He was taken to the hospital and was diagnosed with glaucoma at the Kolebu Teaching Hospital in 1969.

When the blindness started, the society blamed it on witchcraft and a family curse. Some said the parents might have done something wrong to someone and Asante’s blindness was a punishment for this wrongdoing. This was a common perception among most traditional societies as witchcraft was normally used to explain strange occurrences that had no immediate explanation. Some also said that Asante’s blindness was a result of envy from some members of his family or community. Though there were times when Asante thought his disability might have been caused by witchcraft or something of that sort, he had his doubts despite these rumors. Asante rather encouraged his parents whenever he realized they were depressed. As an eldest son, he was expected to help the parents take care of his siblings, but this expectation became complicated with his disability. After several attempts made by doctors failed to cure Asante, his parents then switched to herbal medication and were ready to try any other treatment. This led them to Kyibi Amanfrom in the eastern region of the country in 1971. Asante and his mother stayed there for about six months but there was no improvement, so they packed their things and moved to meet a European herbalist who had established himself in Kyibi in the same year. He welcomed them and gave them accommodation, but only for Asante. His mother was located somewhere about a mile away from where Asante was.

They spent about four months there, but the European herbalist was unable to cure him. The man created a concoction suspected to have been prepared from ginger and other leaves, which was put on Asante’s eyes twice daily. Though the aim was to heal the eye, Asante felt the concoction was rather worsening the situation because of the pain he had to endure when the potion was applied. Asante and his mother began to suspect the man, so they started monitoring every move he made. One evening, Asante was in his room when his mother came knocking. He quickly went to open the door, and his mother invited him to sit outside for a while. Just as they were about to start talking, they overheard a conversation between the herbalist and a man suspected to be the leader of the Kyebi traditional execution group, or executioners. They listened to every word that was said during the conversation. Asante and his mother had put their trust in the herbalist to cure his eyes, not knowing the European herbalist had sold Asante’s head for ritual purposes. Asante and his mother subsequently fled and left to their hometown.

In 1972, Asante was taken to Ho to see an eye specialist hoping he could help him regain his sight. After several tests were conducted, he concluded that Asante’s sight could not be restored and therefore he should be enrolled in a blind school. The news was awful, but Asante was consoled because he could continue his education. Akropong School for the Blind was the school that came to mind. His uncle who was an educationist and grandfather who was the Ghana Education Service director, helped, advised, and enrolled him in the school in 1973 in form one and started with braille lessons. Initially he was very sad because he had to start all over again, along with the fact that his siblings were ignoring him and refused to stay by him and help. When he got an admission to Akropong School for the Blind, they even refused to take him to the school, but his cousins stepped up and assisted him. Things started turning around, and he met a lot of blind students he had met earlier at Anum Boys School. When he was at Anum Boys School, their head teacher invited the Akropong School for the Blind band to perform at their opening ceremony in 1970. He made friends with most of them; George Kotoku, Foster, and other students. These friends helped show him the compound, assisted him and gave him support, and encouraged him. Asante started from form one in 1971 because of the braille component and completed in 1979. Later he did a vocational course for another two years and completed in 1981. Asante left Akropong School for the Blind in the year 1981 and went back to Accra of Blind. He went into the teaching field, teaching at Kotobabi School from 1981 to 1990. Later he was transferred to another school where he retired in 2014.

Asante experienced several hardships, including right violations in the community, stigmatization, discrimination and other demeaning comments from the society. Culturally some people saw him as impure because of his disability. He faced stigmatization, especially when he was of age and wanted to marry. People made comments about if a blind person should get married, and if it would result in blind children. Some people even went further, contacting his future in-laws asking them questions about what Asante’s parents bought for them that they were giving their daughter out for him to marry. Nevertheless, he married his wife when he was in Akropong School for the Blind even before he completed his vocational course in the year 1977. Asante had two children before he married his wife. He would have married the first woman who bore his child, but the pressure from the woman’s family became a hindrance which prevented this from happening. Later Asante’s father introduced him to a lady who understood his situation and agreed to marry him. They got married in 1977 and have four children together. That is where the discrimination started. Her parents said Asante could not take care of her since he was blind and took his wife and child away from the village where he was. Discrimination in the family was there as well, because his siblings did not cooperate with him, though by then his cousins were there and helped him. They showed him love and did not make him feel as though he was blind. This is in contrast with Asante’s siblings, who were not so caring. In order to have someone to assist Asante, his father thought it wise to help him marry his wife, even though Asante himself did not agree as he was still in school. The lady however, agreed to marry him with the permission of her parents. Early on in their marriage they did not stay together as a couple, and she only visited during holidays until he finished school and started working in the 1980’s.

Asante joined the GAP when he was still in school. He heard about them when they came to do a convention on the campus in the year 1974. Mr. Plaha and some other members were there for visibility and spoke to some of the students, particularly the older ones. Asante decided to join, and Mr. Plaha made him the campaign manager while he himself was contesting to be president of the union. Asante was the singing master for the school by then and led the singing of South African songs. Asante was hard working so when Mr. Plaha told him about the GAP he joined and became Plaha’s campaign manager, advocating for him strongly and helping him win the presidency. That was the beginning of Asante’s time with the GAP, and he would attend meetings at the Accra Rehab whenever he came home. He was part of the GAP until he completed school. During the AMA meeting for the GAP he was elected the regional president, while Mr. Plaha was the national president. He was elected to this position twice, each for a four-year term, spanning from 1981 to 1988. After stepping down as president and handing the position over to Adjeihom Paul, he became the PRO for the region. Asante stepped down because the constitution stated that one could only serve for a maximum of two four-year terms, while Paul would serve for a few years before stepping down due to health issues. Though the constitution was there before he joined, Asante was one of the people who made amendments to the constitution. The executives would read the constitution at Akropong and all agree on it.

When Asante was the president he fought for the growth of the association. Asante and his team moved from one place to another to mobilize and get people to join the GAP. Through this exercise, they got more members to join the association. They also devised a way of sharing information to their members, by organizing meetings for the leaders at the national level aimed at transferring information from the regional level to the districts level. Also, conferences were organized to solicit money for the organization. As a president, Asante joined hands with other leaders and wrote to several European and foreign organizations to come to their aid by raising funds for the association. They were able to get some people from America and Denmark, with Denmark became their biggest donor and assisted the association financially. Asante also participated in the white cane recognition program. They went to lorry stations, on the street, churches, markets and other places to orient the people about the white cane.
When he became the national PRO for GAB, Asante and other members of the association wrote pamphlets and handbooks about the association for the general public. Mr. Ham was a journalist, so he published some of the handbooks and papers in the form of newspapers.

After Asante stepped down as a PRO, he became president again. This was because the Ghana Blind Union emerged and collaborated with GAB in 2008, and a new constitution was introduced allowing all past presidents to be delegated and elected again as president. He served as a president for another eight years, making him the first president to have served the association in this position for sixteen years.

Comparing his years as GAB president and GBU president Asante stated that the GAB had fewer facilities, and as a result did not have an organized secretariat. They had a small kiosk made by metal which was used as office. The GBU had enough furniture to accommodate the leaders so their programs were more of field work, but they had good structures which enables structured secretariat. When the GBU emerged, the donors to the GAB did not change, but rather increased. Though most of the GAB support was from donors, the government also supported when they asked for some support. The government under the Acheampongs regime helped most visually impaired people into the educational system until the introduction of the GES system when J.J. Rawlings took over, which laid off craft specialist including many visually impaired people.