Disability in Ghana
Skip to content
Eric
June 19, 2019by ghanadisability 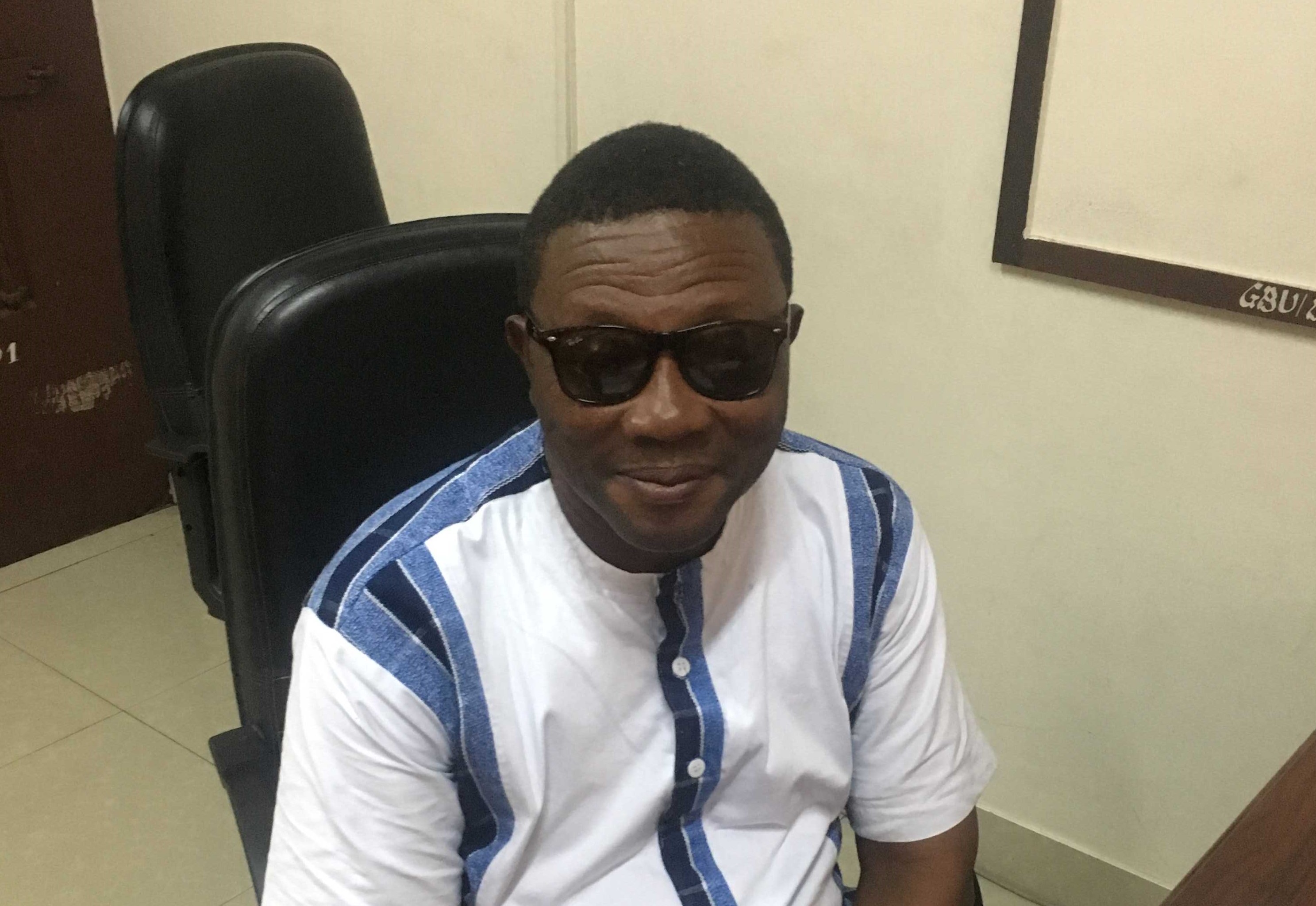 Eric Kwobla Ofori was born in July 1960 at Vaneh near Ho in the Volta region of Ghana. He belongs to the Ewe ethnic group and is the eldest of five children born to Madam Anni Gbagbo and Rev. Daniel Kwame Ofori of the Methodist Church.

Due to his father’s profession as a Minister of the Gospel who travelled around the country, Ofori completed most of his schooling in the Western Region of the country. He began his education at the age of seven in 1967. Later while he was in middle school in 1976, he began to experience a growth on his eyes. Although he underwent surgery the problem persisted. After trying the medical option without much success, Ofori’s mother decided to take him to an herbalist in the Western Region. Here the herbalist diagnosed his ailment as being a result of piles. For a period of time Ofori had a daily dosage of herbs applied to his eyes to combat this. However, this was to no avail. His family then decided that he be taken to a faith church where the spiritual option could be explored. This was in line with the cultural practice of seeking a spiritual remedy for otherwise unexplainable phenomena. Here he was informed that his sight problems were the direct results of a spiritual attack from the Devil who was attempting to alter what was otherwise a very bright future. After a period, Eric’s father got fed up with the spiritual process and decided to go back to the hospital. Here the doctor reprimanded them for allowing the condition to deteriorate and waste such valuable time. In 1979 Ofori underwent a second surgery. Although it was relatively successful in halting the growth around his eyes, he virtually lost the sight in one eye and suffered greatly diminished vision in the other. After the surgery, his parents moved to Ho in the Volta region and Ofori was enrolled at a local secondary school at Vaneh near Ho.

During that period in 1979, information about low-vision was limited and not widespread. As a result, Ofori had a tough time in school because he could not see the board, which affected his academic performance. After struggling through secondary school with his sight condition, Ofori’s father was hesitant for him to continue school in his condition without support, however Ofori was determined to go. Unfortunately, after he entered teacher training college in 1985 an event occurred which had a massive impact on his life; his parents divorced. This brought about a lot of hardship for Ofori and his siblings. Ofori’s father wanted him to enter the Ministry, however, he was convinced that was not his calling. Instead, he had wanted to enter the teaching field. Unfortunately, just as he entered the training college his family was hit with the divorce of his parents and massive economic hardships. This situation coupled with his sight challenges compelled Ofori to abandon his teaching ambitions for the time being. As a result, he dropped out of the teacher training college.

For a period of two years, he served with the clergy of a local church. However, as he had always expressed, he did not have the right calling and he gave up on this endeavor. Almost immediately, he gained employment as a shop keeper in Ho. On the surface it appears significant that a person with a sight disability was hired to be a shopkeeper. Knowledge of this condition was quite limited at that time. Consequently, distinctions were only made between blind and sighted situations. It was perceived that either you could see, or you could not. Since Ofori had a level of vision, and could identify currency, his disability was simply over-looked or even ignored. Thus, he had to strain his limited sight to cope with expectations. However, business was not fulfilling enough for him. In 1988 on the advice of his father, Ofori undertook a course in craft at the Rehabilitation Center. This gained him employment with the Ghana Education Service as a craft instructor in 1987. After teaching at the Methodist School in Ho for a year, Ofori entered the training college under a special program and finally graduated with a basic certificate in Education in 1991.

It was in 1988, even before Ofori gained admission to teacher training college, that he was invited to a meeting of the Ghana Association of the Blind in Ho. At this event, he was greatly inspired at the level of empowerment and confidence exhibited by the members. He was particularly impressed by the braille readings and the level of interpretation and articulation of Government policies. He was further inspired by the fact that most of the members and leaders of this group were totally blind. As a result, he realized that there was a lot he could do as a person with low-vision. He quickly developed a relationship with them and joined the Association. At the time the Volta Region branch had just begun and accordingly there was a membership drive. Ofori found that he was greatly needed as the members relied on him to help them get around, especially when it came to outreaches for mobilization. He also assisted in resource mobilization, running errands, and helping to organize programs for the Association. Later that year at a workshop organized by the National office of the Ghana Association of the Blind, elections were held to appoint regional leaders. At this point in time there was no regional structure for the Volta region, which was the situation in most regions as the GAB was still in the process of evolving its regional structures. At this election, Ofori’s exhibited zeal and effort in assisting with the organization of the group in Ho was recognized and he was elected as the secretary to the Regional Branch of the Association. Ofori and his fellow executive leaders of the Volta region branch of GAB were faced with the challenge of establishing district branches of the organization. They were engaged in advocacy on various fronts, and as secretary Ofori was on the front lines as his position meant he oversaw correspondence and follow ups. He engaged community leaders and helped with the discovery and mobilization of the blind.

In 1990 The Volta region branch of the Association was rocked with several leadership challenges. As a result, a vote of no-confidence was passed against the current president. At an emergency meeting of the regional Council, Ofori was appointed as acting regional President, which he held until the following elections when in 1994 he was unanimously elected at a regional convention as the President of the region. By this appointment, Ofori became a member of the National Executive Council. As President, Ofori championed the cause of empowering blind individuals. He also made sure that those with low vision were not ignored, as at this time there was still limited information about this level of visual disability and rose public awareness on the subject. Ofori also led a regional campaign to get children with visual impairment into school. In line with the objectives of the GAB, Ofori inaugurated many district branches in the Volta region. He was a strong advocate for the introduction of the tactile ballot system of voting in 2001 and campaigned hard to ensure that most of the district branches in the Volta region also received training. He involved himself in the training effort, travelling to rural areas to teach potential voters to facilitate their independent participation in the National general elections of the country. He was also involved in lobbying for the release of government funds from the local authorities. In line with his fight for economic empowerment for blind individuals to ensure their full participation in society, Ofori also sought funding through the submission of proposals to several would-be funders. Ofori’s main drive was to create awareness for the rights of blind persons to lead productive lives in society. Ofori’s main strategy was to use the opportunities created by projects or events to establish district branches.

In 2007 his term in office came to an end under the restrictions imposed by the amended constitution of the GAB that limited the terms of elected members. After this, he continued to play an active role as a member of the local Ho branch. In 2009 Ofori won a scholarship to India to take a course in social entrepreneurship. Upon his return to Ghana, he established the New Horizon Foundation for the Blind. The focus of this organization is to support blind and partially sighted children in the area of education and rehabilitation. Despite the fact that Ofori has founded a new organization, he is still a staunch member of GBU. In fact, he views the roles of both organizations as complimentary.