Disability in Ghana
Skip to content
Ebenezer
June 18, 2019by ghanadisability 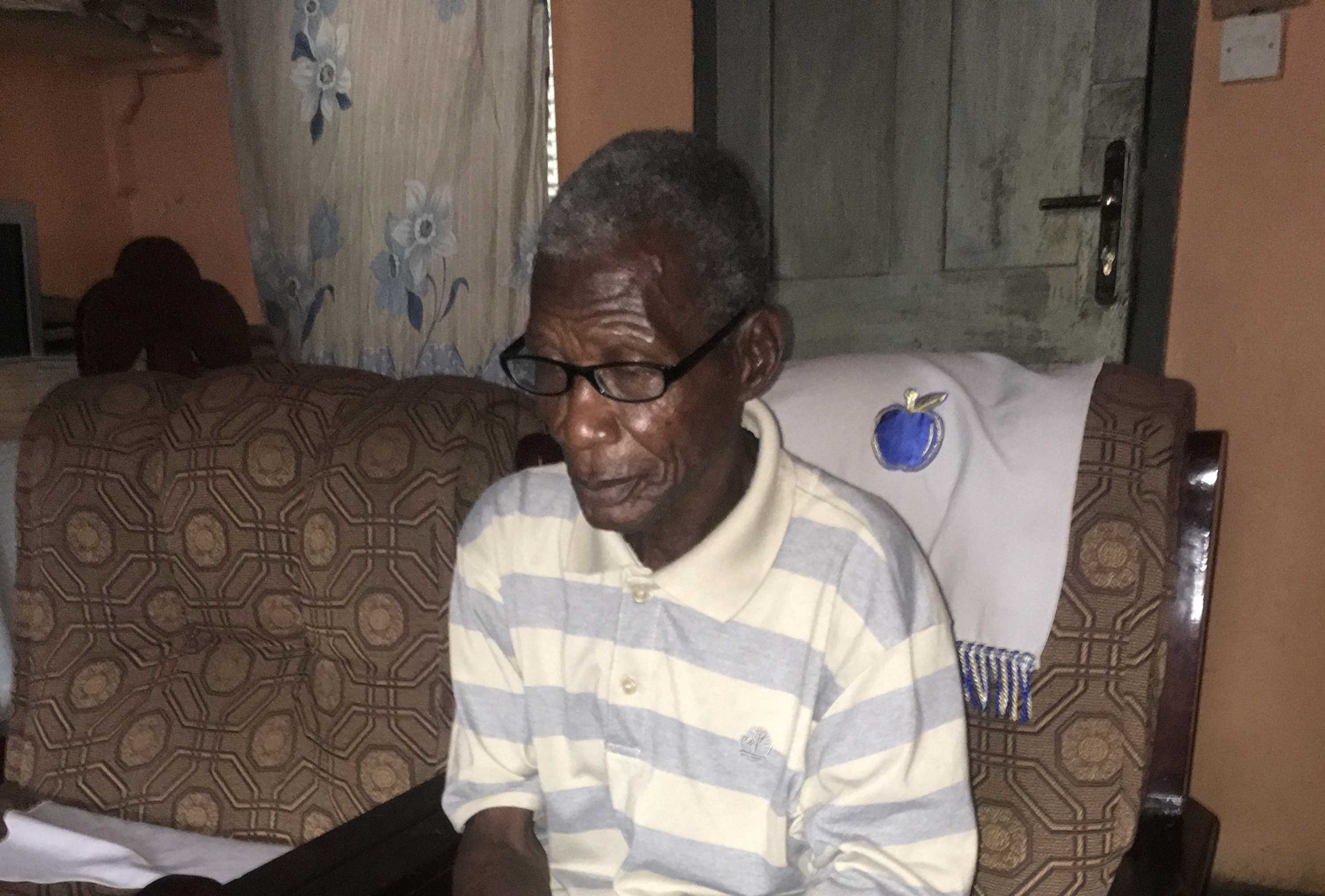 Ebenezer Appiuh Karlong was born on September 21, 1944 in Manyoro, a farming community near Navrongo in the upper East region of Ghana, to a family of five. He went to Ajumako Local Authority School in the Afram Plains of the Eastern region where his father was a migrant farmer. Karlong furthered his education at Bremen Secondary School in 1966 and completed in 1970. After his education, Karlong migrated to Tarkoradi in the Western region of Ghana in 1971, where he got a job at Allied Chemical. Mr. Karlong was employed as a restaurant worker and worked there for four years before leaving to the Pure Paper Convention company in 1975. Karlong was with them for a long duration as a multi-cutter operator.

Karlong enjoyed his younger years as a sighted individual, working with several companies and eventually getting married. In his role as the bread winner of his family, Karlong started helping other members who needed support. He tried his best to provide for his family until he had a problem with his sight in 1986 at the age of 42. Karlong was working one day when paper particles sprayed into his eyes. At that moment he could not see or open his eyes. Karlong was rushed to the hospital where he was given the opportunity to explain to the doctor what happened to him. After several checkups, the doctor gave him some medication for his eyes hoping it would enable him to see and open his eyes. When the medicine was applied for the first time, Karlong experienced a very sharp pain like he had a cut on his eyes. After some time, he called the company nurse and showed her the medicine because he doubted the professionalism of the doctor. According to Karlong, the doctor was talking with someone and was not paying attention when Karlong was telling him what happened to his eyes so he believed the doctor might have given him a wrong medication.

For some time, Karlong could see partially until his sight began to recede. When this started, he became upset and reported it to the management of the Company he worked for. He was promptly referred to a specialist eye clinic for further treatment, where he underwent surgery. He was also provided with a pair of spectacles which enabled him to partially see. With the spectacles, Karlong was able to resume work. However, although he could see better, he still had to strain to keep up with his daily work routine. This situation lasted for a period of time until the pain in his eyes resurfaced. After a while, his eyesight began to deteriorate, and he subsequently sought treatment at the Government hospital in Accra. He kept up with this treatment for about two years until he lost his sight completely in 1988 when he was 44 years old.

When Karlong lost his sight, his family was understandably devastated because he was the only educated person in the family and a lot was expected of him. He was the bread winner of his family and after his education, his family thought he was going to secure a good job in order to take care of them. However, this prospect died with Karlong’s sight. Although in those days the two schools for the blind had been established in Akropong, located in the Eastern region of the Country in 1948 by the Basel mission, and another in Wa, in the Upper region by the Methodist Church in 1958, there was very limited information available about rehabilitation of an adult blind person. Public education on blindness was limited. As a result, families were often left to their own resources. In frustration, the entire situation of sight loss was blamed on witchcraft, which is in line with cultural beliefs when there appears to be no tangible explanation for an ailment or situation. Karlong’s family naturally attributed the sight misfortune to witchcraft. This notion was re-enforced by the fact that he had inherited the wealth of his late father. For such a fate to befall the heir of the father’s estate was firmly believed to be an act of witchcraft intended to destroy what otherwise would have been a very prosperous life.

Although Karlong did not fully accept the explanation of witchcraft as being responsible for his blindness condition, he could not rule it out completely. This was due to the fact that members of his family refused to allow him to possess his late father’s property that was due him. Although it was possible that this may have been due to greed or discrimination on the part of the family members who wanted to take advantage of a blind individual, in the cultural experience of the people, witchcraft was known to cause such problems. Karlong, who did not know about the existence of social welfare, reported them to the chief but there were no signs of change. In fact, the family started discriminating against him, so Mr. Karlong went back to Takoradi, where he currently lives.
Mr. Karlong became traumatized and did not know how to cope with his disability. To add to his misfortune, his wife could not accept the fact that her husband had lost his sight and in 1987 decided to leave him. He sought the intervention of his wife’s uncle to talk to her on his behalf but to no avail. She left him to her hometown, Adanse, located in the Ashanti region of the country. Things were difficult for Karlong and he resorted to drinking. Life became unbearable for him as he began to experience discrimination in the house and in the community. In his house, his fellow tenants often left obstacles in his way to hinder his safe passage. Many times, when he decided to go out, people refused to help him cross the road and drivers also refused to take him on board because of his disability.

A new chapter opened in his life when in 1989, The Ghana Association of the Blind held a congress at Tamale in the northern sector the country. News of this congress reached Navrongo, where Karlong was paying a visit to his hometown. Karlong heard the news when the district social welfare director came to Navrogo to announce the congress. Almost without hesitation, Karlong joined the Ghana Association of the Blind in 1989, where his membership became very useful to himself and the people around him.

Karlong was impressed by the confidence and level of empowerment exhibited by the members of the Ghana Association of the Blind. He began to see a new perspective on life and realized that there was hope for him. He stopped drinking and put on a more optimistic and serious attitude and understanding about living as a blind person. Mr. Plahar, who was the president of the Association, inspired Karlong and taught him many things, including how to use the white cane, how to walk without the white cane, and how to be self-oriented whenever you find yourself in new environment. Through workshops, Karlong learned much and eventually went on to teach these things to the other blind persons in his district. When Karlong joined the association, he participated in several advocacy programs. These mainly dealt with the rights of the blind individual and acceptance in the community. There were many occasions when he appeared on radio stations to talk about issues pertaining to discrimination towards people with disability. Karlong also took part in organizing workshops to teach blind people the use of the white cane.

Karlong recalls that organizing blind people in those early days was difficult because there was virtually no financial support from any quarter. Consequently, they relied on their own meager resources to fund trips and even to support other blind individuals in what little way they could. They put in significant effort into organizing the blind in the region. This entailed walking from community to community when they could not afford transportation, enduring harsh conditions like the blazing sun and rain when it fell. They walked to villages far away to ask other blind people to join. They went to churches and other social gatherings places to solicit help to raise funds for their programs.

Not everyone was receptive to their message, and there were times when they were practically driven away as carriers of ill fortune. However, as more blind persons began to recognize the strength in their numbers and the enlightenment the GAB taught, their numbers began to increase steadily. Despite the hardships he faced, Karlong remained focused on organizing the blind in the region. Gradually the message of rights began to be appreciated by the local people. Karlong and his colleagues began to establish district branches in the region. The effort was aided by the policy of the Kufour Government (2000-2001) to make funds available for the district disability groups.

Through Karlong’s efforts funds were secured for the purchase and distribution of white canes for blind individuals in the region. As a result of his hard work, Karlong was unanimously selected to be the secretary for the region at the election held to choose leaders for the Western regional branch of the GAB. Later on, he was elected as Regional president.